Home » All Countries » Austria – Country of a Thousand Faces

Austria – Country of a Thousand Faces 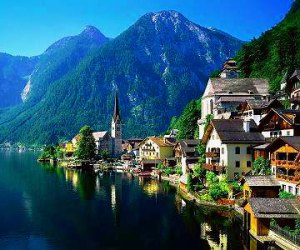 Western and southern parts of Austria are dominated by the Alps, while the eastern provinces, including Vienna are situated in the Danube basin.

The Austrian Parliament has two chambers. National Council (Nationalrat) has 183 members who are elected by direct popular vote for five-year period. Federal Council (Bundesrat) is the second chamber with about 62 members representing different regions. Its members are elected for six years.

Austria has a rich cultural heritage, with a special place of Wolfgang Amadeus Mozart. But also the music of Franz Schubert is very popular. In the field of philosophy and ideas you can find controversy work of Sigmund Freud, while Ludwig Wittgenstein is one of the most influential philosopher of 20th century. Paintings by Gustav Klimt from the early 20th century are highly reputable.

Austria has a mixed industrial-agricultural economy, but an important source of income is tourism.

As a tourist in Austria, you will shortly find out that everything is well prepared for you and services are excellent in the tourist areas. Whether you visit any place in the summer or winter you will be really satisfied – from tourism and cycling signs of groomed trails, through camping facilities and winter resorts, to cultural and spa programs in the hotels and family pensions.

The highest point of Austria is Grossglockner (3 798 m) and the lowest point is Neusiedler See (115 m).

There are 6 national parks in Austria. The beauty of these six totally different protected natural areas you can enjoy on foot or by bike.

View Austria – Country of a Thousand Faces in a larger map