The third largest island in the Mediterranean Sea – after Sicily and Sardinia – is that of Cyprus. Located 113 km south from Turkey and about 120 km west from the Syrian coast. Although it geographically belongs to Asia, but culturally to Europe. When you say Cyprus, think of Aphrodite’s island of love and beauty in the eastern Mediterranean.

Cyprus is an ideal place for sport lovers. In winter you can both ski in the mountains of Troodos and also swim in the waves of the sea. There are golf courses, tennis courts and you can enjoy plenty of water sports here. 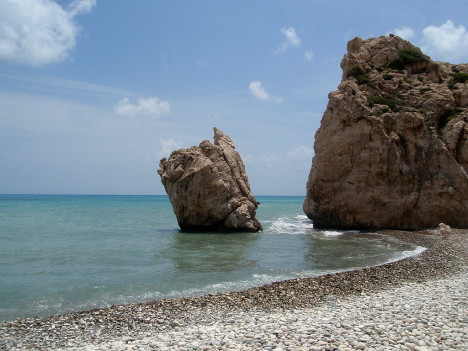 Cyprus has been divided since 1974 into two independent parts – the northern Turkish and Southern Greek, the boundary leads even through the center of the capital city of Lefkosia (Nicosia). Reserve at least one day for a visit to the Turkish part of Cyprus – architecture buffs will appreciate the Gothic cathedral converted into mosque.

If you would have the opportunity to attend famous local outdoor wedding with a reception, often involving the whole village, breaking the pomegranate – a symbol of fertility, singing and dancing until dawn.

Cyprus has lots of archaeological sites and an enormous number of monuments from the times of biblical apostles Paul and Barnabas, Romans, Ottomans, Crusaders. You should try easy hiking into the Troodos mountains and Akamas gorge.