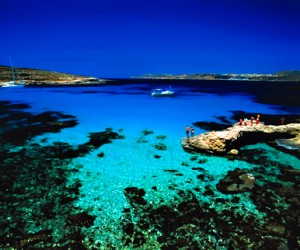 Malta is an island located in the Mediterranean sea, south of Sicily. This archipelago consists of islands of Malta, Gozo and Comino, which are inhabited. Then there can also be found uninhabited islets as Cominotto, Filfla Island or St. Paul’s Island. The capital and largest city is Valletta.

Malta, officially the Republic of Malta, is a Mediterranean nation, which for centuries was influenced by Roman, Arab and British culture. We can find a large minority of foreigners, most of which are represented by the British. Most inhabitants live on Malta‘s main island in the cities. Almost all the people belong to the Roman Catholic Church. On the island there are over 360 churches and at every step you can meet monks or nuns. Catholicism plays an important part of Maltese life.

The most important source of income in Malta is tourism, which also employs a third of the population. Malta and nearby islands to visit for over a million tourists a year. Tourism is therefore 35% of the gross domestic product. Malta has no own sources of raw materials, and is dependent on imports. Agriculture is concentrated on the island of Gozo, where we find more greenery and better conditions for growing wheat, barley, potatoes, legumes, vegetables, citrus fruit and grapes. In the summer season, vegetables need to be imported, because there is a very dry climate. Industrial production is focused on engineering products, electronics, shipbuilding and ship repair and textiles.

Malta is known for its numerous and well-preserved monuments from the times of megalithic culture. This leads to the assertion that this developed culture lived on the island already between 4000 to 2500 BC. Then the island had many different cultures: the Phoenicians, Carthage, Rome, Byzantium, Arabs, Normans, kings of Castile, Johannes and Napoleon. During the world wars, Malta became an important base for the British forces in the Mediterranean Sea. Malta gained independence from the United Kingdom in 1964, became a republic in 1974 and in 2004 became a member of the European Union.

The islands are almost without vegetation, but Malta is interesting anyway. Indeed, the mythical Odysseus reportedly stuck here for seven long years. It is a paradise for divers and water sports enthusiasts, history and art lovers and you can enjoy here good food, drink and social life as well.