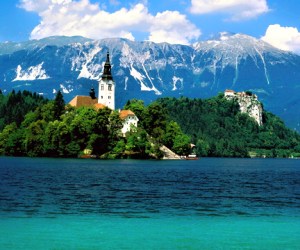 Slovenia, officially the Republic of Slovenia, is a young country in Central Europe touching the Alps and bordering the Mediterranean. Slovenia borders Italy on the west, the Adriatic Sea on the southwest, Croatia on the south and east, Hungary on the northeast, and Austria on the north. The capital and largest city of Slovenia is Ljubljana.

Slovenia covers an area of 20,273km2 and has a population of 2.06 million. Around 40% of Slovenia’s land mass is elevated land – mostly in the form of mountains and plateaus – which is located in the interior regions of the country. The highest point of Slovenia is the 2,864m high Mount Triglav, the lowest point is the Adriatic Sea at sea level. The Slovenian coast is 47 km long and is very charming.

As the vacation centers are mainly used Isola and Portoroz. On the way to the sea, we recommend a small break in Lipica, where they still kept the pride of Slovenia, known for white Lipizzaners. In Slovenia there is one of the largest cave systems in the world – Postojna Jama, a 20-kilometer system of tunnels, and the nearby medieval castle Predjamski. At the north east of the country you can visit beautiful Triglav National Park and Lake Bled, like cut from a fairy tale. In the middle of Lake Bled there is Bled island with the ancient castle on it.

Slovenia may be, more than any other country, marked as a “thermal paradise“. An incredible amount of thermal springs are mainly located in the northeast of the country where you can find lots of of spas.

Slovenia is a beautiful country with lots of undiscovered beauty, suitable for all romantic souls, and especially those who want to enjoy well deserved vacation.

Slovenia is a country of high mountains, is full of forests and lakes, impressive cave systems, medicinal springs and crystal clear sea. It has great culinary traditions, within which you can taste fine wines or traditional fruit brandy, combined with excellent food coming from the sea, rivers, forests and green meadows. It is a country where on a relatively small area there is everything one needs to spend an active holiday.