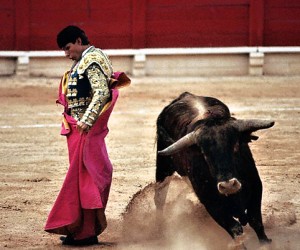 Spain is the fourth largest country in Europe and lies on the Iberian Peninsula. The Spain also includes two North African cities of Ceuta and Melilla, the Balearic and Canary Islands. Spain is surrounded by Atlantic Ocean, Mediterranean Sea and the Bay of Biscay. Spain is separated from Africa by the Strait of Gibraltar and from the rest of Europe by the Pyrenees mountains. We can find almost all possible types of landscape here. The nature is really varied. There are mountains, deserts, semi-deserts, plains, beaches, cliffs and deep fertile valleys. The country is laced with a number of rivers, however their dry riverbeds are not unusual in the summer months. There are very watery rivers like the Ebro, Tajo, Duero and Guadalquivir. Iberian Peninsula consists of a high plateau (the Meseta), which significantly contributes to the fact that the average altitude is around 600m. Spain is the second most mountainous country in Europe (just after Switzerland). While Madrid is the highest European capital city (655 m). In Spain, there is Mediterranean and continental climate.

Spanish cuisine
Spaniards have a great fondness for food, so they put the care in its preparation. Spanish cuisine is a tasty and colorful. The basic food-stuffs which they use are fish and other seafood, beef, mutton, pork, but they use also poultry, rice, potatoes, beans, various vegetables and white bread. Spaniards also use to add their typically piquant spices and herbs that make their dishes come unmistakable taste. Their kitchen is divided into Catalan, Basque, Galician, Castilian, Andalusian, and more. Each of them is something typical and special. However in all of them you can find lots of garlic and olive oil. The best known Spanish dish is certainly “paella” which is a mixture of rice, vegetables, meat or seafood and spices. Furthermore, gazpacho – cold vegetable soup. National food is tortilla – raw potato omelette with eggs and onions. Typical Spanish cuisine is tapas – small savory snacks that are served before a meal during the day and especially night.

Spanish restaurants
In Spain, all restaurants are legally obliged to offer a “menu del Día“, which includes appetizer, main course, dessert and beverage. This dish is served only at lunch time and it is a popular and inexpensive way to eat well. Expensive restaurants sometimes offer a tasting menu, where you can taste the little bits of several courses. It is common that during the bank holidays, the restaurants are closed.

Spanish drinks
A typical drink in Spain is wine. It is usually served with both lunch and dinner. The oldest and best known wine cellars in Spain are in La Rioja. These wines can be compared with the quality of French wine from Bordeaux. They have also classic wine Jerez and popular Spanish sparkling wine Cava. The perfect complement to all the dishes is a sweet Sangria, which consists of a mixture of fruit with sweet red wine, a little liquor, fruit juice or sparkling wine. It is best chilled and with ice.

Accommodation
In Spain you can find a wide range of accommodation of all kinds. From humble “fondas” or guest houses to luxury five-star hotels. Great interest is enjoying rural accommodation, located on farms, in cabins or in the restored palaces. It is possible to do a variety of outdoor activities, horse riding, cycling or hiking.

Spanish unique accommodation is the “Parador” which is a chain of hotels which are located in different historic buildings or in national parks, with a beautiful view of the surrounding countryside. It is also possible to stay in a bungalow or apartment, they are located mainly in the coastal tourist resorts. There are also youth hostels, which can be found throughout the country. It’s a cheap way of accommodation. In Spain there are also over 1400 camps of various categories.

View Spain – tomatos, bulls and tequilla in a larger map