Home » All Countries » Denmark – country of design and wind energy 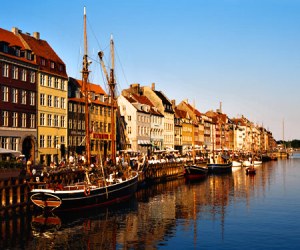 Denmark is a Scandinavian country in Northern Europe and the senior member of the Kingdom of Denmark. It is the southernmost of the Nordic countries, southwest of Sweden and south of Norway, and bordered to the south by Germany. Denmark borders both the Baltic and the North Sea. The country consists of a large peninsula, Jutland (Jylland) and many islands, most notably Zealand, Funen (Fyn), Vendsyssel-Thy, Lolland, Falster and Bornholm, as well as hundreds of minor islands often referred to as the Danish Archipelago. Denmark has long controlled the approach to the Baltic Sea; before the digging of the Kiel Canal water passage to the Baltic was possible only through the three channels known as the “Danish straits”.