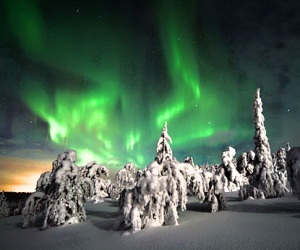 Finland, officially the Republic of Finland (Finnish: Suomi), is a Nordic country situated in the Fennoscandian region of Northern Europe. It is bordered by Sweden on the west, Norway on the north and Russia on the east, while Estonia lies to its south across the Gulf of Finland. The capital city is Helsinki.

Finnish forests offer not a large number of species. The importance of landscape and forestry has only pine, spruce and birch. With considerable isolation of the country and small population, many species that are now very rare in othe rparts of Europe, survived in the wild here. In southern and central Finland, you can normally see the elk, the largest of nearly seventy species of mammals. There are living several hundreds of brown bears. In addition, there are living arctic foxes, wolves, lynx, marten, muskrat, beavers, otters, wolverines, lemmings, hares and hedgehogs.

All the water in Finland is so clean that also in Tampere – Finland’s third largest city, you can find trouts in the lake that is in the middle of the city.

« Estonia – Baltic pearl
Latvia – a heart of the Baltic States »