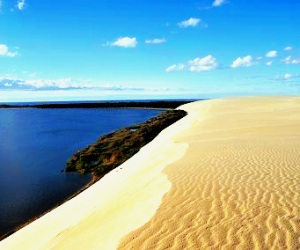 Lithuania, officially the Republic of Lithuania is a country in Northern Europe, the southernmost of the three Baltic states. Situated along the southeastern shore of the Baltic Sea, it shares borders with Latvia to the north, Belarus to the southeast, Poland, and the Russian exclave of Kaliningrad to the southwest. Across the Baltic Sea to the west lies Sweden and Denmark. Its population is 3.32 million. Its capital and largest city is Vilnius.

Lithuania is the most populous of the three Baltic States. Lithuania’s surface is mostly flat except for a few small hills on the western plateau and the eastern highlands. The highest point is at the Aukštasis top in 294 meters. Lithuania has 758 rivers within its territory, more than 2,800 lakes and 99 km long coast of the Baltic Sea, which is mainly used for recreation and is the subject of conservation. Forest area covers just over 30% of the country.

Capital of Lithuania – Vilnius is a picturesque port on the banks of the rivers Neris and Vilna with one of the architecturally most impressive old towns in Eastern Europe. University of Vilnius, founded in 1579, is the Renaissance complex with countless inner courtyards, which are like city within a city.

Lithuanian cuisine is known abroad mainly for its cold beet soup. Regular part of meals are potatoes, which are the most popular cakes and Cepelinai – potato dumplings stuffed with meat, cream cheese and mushrooms.