Home » All Countries » Poland – country of the BIG Pope

Poland – country of the BIG Pope 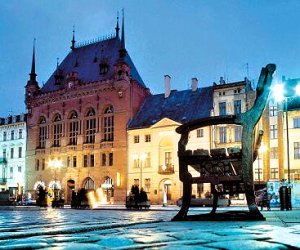 Poland lies in Central Europe and is stretched along the Baltic Cost which is 528 km long. It offers sandy beaches which are among the best in Europe and their characteristic feature is the narrow sandy scythe, which were modelled by the sea. Country borders with the Czech Republic, Slovakia, Ukraine, Belarus, Lithuania and Germany. Poland’s surface is mostly lowland with large lakes, the mountains are only in the south of the country, on the borders with Slovakia and Czech Republic. The highest point is Rysy peak in the High Tatras (2,499 meters above sea level). The landscape is mostly covered with deciduous and mixed forests, pastures and meadows. The climate is maritime and continental. There is a number of protected areas, national parks and reserves.

You can go to Poland for culture (historical towns, castles, palaces, museums) or nature (Tatra Mountains, Beskids, Bieszczady, Pieniny or Table Mountains). If you’re tired of walking the hills and mountains, you can still benefit from the Baltic coast – although the Baltic is quite cold, it still has its charm. You need to visit the Gulf of Gdansk, especially Hel Peninsula is a place that you might like. In the evening, it offers various bars, discos and nightclubs.

The best time for sightseeing in Poland is the period of late spring or early autumn when there is a pleasant warm and resorts are not as crowded as during the summer season. In July and August, the mountains, lakes and seaside resorts are full of tourists (like in the other parts of Europe). However, if you go to the cities, they are mostly calm and quiet. Most of the accommodation and catering facilities on the coast and in other popular locations are closing in the fall and reopening again with the arrival of spring. From late November to mid-March you can enjoy ski season in Poland.

On 1 January 2004 Poland joined the European Unionand later on 21 December 2007 joined the Schengen area and were thus abolished checks at internal borders. That does not mean that you can travel across borders without any proof. You must always carry a valid identity document, ie passport or identity card with machine readable zone. If you want to stay in the country for less than 3 months, EU citizens are not required to have residence permits.

Before traveling to Poland ask first your health insurance company for the European Health Insurance Card, which you must show if you need urgent medical attention. Before the trip we recommend that you take out additional health insurance. In each town should be at least one pharmacy with night operations.

The official monetary unit is Polish Zloty. Prices in Poland are still relatively lower than in Western Europe, more expensive are only imported goods and the accommodation in hotels. You can exchange money in every town in the bank or exchange office.

If you are traveling to Poland, along with your pet, it is necessary to have an international passport, and need to be identified by microchip or tattoo and vaccinated against rabies.