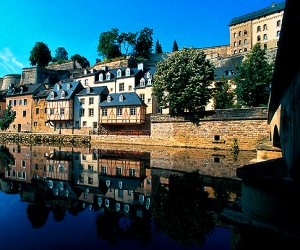 Luxembourg is a landlocked country located in Western Europe, bordering Germany, Belgium and France. North part of the country is covered by barren land Oesling with hills reaching 400-500 meters. At the south is the fertile land Gutland and Lorraine Hills. The climate is influenced by the Atlantic, temperatures are mild in winter, rarely snows.

Population
Original Luxemburgers make up about one third of the population. There are more than 180 thousand foreigners living here, mainly Portuguese, Italians, Frenchmen, Belgians and Germans. Over 7,500 residents are officials of the European Union. Most of the population is Catholic, however there are small Protestant and Jewish communities. The country has 100% literacy.

Economy
The country has well developed industry and service sector. An important source of funds is tourism. Industry is focused on the processing of metals and chemicals, which are major export items. Among the trading partners of Luxembourg are the surrounding states of European Union. The country is also doing well in the banking sector which is mainly due to political stability and liberal laws.

History and culture
History of Luxembourg started to count at the time when Lützelburg castle was built. It happened around the year 963. Then, around the castle, began to develop a medieval city that became the center of a small estate. Between 1659 to 1839 the territory of Luxembourg was several times reduced. Luxembourg gained independence in the 19th century. After World War II Luxembourg stood at the birth of NATO and the European Community (in 1993 renamed to the European Union).

The most popular coffee in Luxembourg is “café au lathes” – coffee with boiled milk, as well as cappuccino and espresso.

View Luxembourg – green heart of Europe in a larger map