Are you going on vacation to one of the greenest countries in EU – Slovakia? So let’s head straight to the Slovak Ore Mountains, where in its north-east part you can find one of the most beautiful areas in Slovakia – Slovak Paradise National Park. You can convince yourself why it is proudly called Paradise, by taking several trips through its charming and rugged terrain that covers an area of 197.63 km². 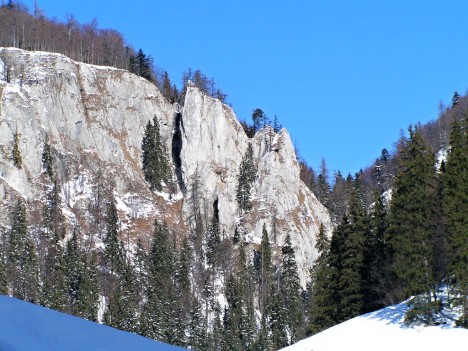 The three hundred kilometres of trails will take you through amazing gorges and canyons, with lots of lazily flowing rivers, bubbling streams and gurgling waterfalls. You will need to pass through the installed ladders or metal grids on the certain parts of the limestone rocks which adds some flavor to your trip adventure. Yet there is nothing to worry about, since there is no extreme climbing performance waiting for you on the way. Therefore you can in good conscience take some of the popular routes, leading e.g. through one of the most romantic gorges – Suchá Belá, or through Hornád Canyon (Prielom Hornádu), Veľký Sokol, Kláštorska gorge or Sokolia valley, where you can enjoy the beauty of the highest waterfall in Slovak Paradise – Závojový waterfall (75 metres high).

Most of the Slovak Paradise is covered by forests, which is a home to many animals. Among the most famous inhabitants are such as the brown bear, gray wolf or lynx. But do not worry, they live in inaccessible areas, and the likelihood that you meet them during your trip is almost zero. However you will be accompanied by butterflies, birds and hares and if you will have a luck you should also meet basking otters. Right thanks to this diversity of animal and plant species Slovak Paradise became the first protected area in Slovakia already in 1964 and 24 years later was declared a national park.

Very popular are also local karst caves, whose concentration is here undoubtedly the largest from all over Slovakia. However only one cave is open to the public from the three hundred discovered underground caves. It is Dobšinská ice cave, which in addition to its fabulous formations boasts the title of the first electrically lit cave in the world. Today’s 1km long guided tour is already equipped with modern facilities. Looking at the beautiful ice decoration you will understand why it was inscribed on the UNESCO World Heritage Site. The caves in the Slovak Paradise were discovered many thousands of years ago by ancestors of modern man. Several prehistoric tools were found here from the Stone Age and Palaeolithic Age, while the age of others is estimated at 45 million years.

The ideal starting point for your tours around this beautiful national park can be Čingov village, Podlesok, Dedinky or Hrabušice. For higher security there are mainly one-way trails so the map should really not be left at home. When planning a trip do not forget the appropriate footwear and be always prepared for the rain. Never leave the marked trails, otherwise you can get lost easily.

If your ways lead to Slovakia, Slovak Paradise National park should not be missed.