Monumental, amazing, powerful. These are attributes which can characterize Spiš Castle, the largest castle ruins in the Slovak Republic and one of the largest castle complexes in Central Europe. The castle was added onto UNESCO’s World Heritage List in 1993.

Spiš Castle is spread on an area of more than 4 hectares on a travertine hill at an altitude of 634 meters. You’ll find the castle located just outside the village of Spišské Podhradie, close to medieval town of Levoča. While it’s possible to walk the distance from the village the castle, the walk itself will take more than an hour to complete; which is why many visitors choose to simply drive up to the parking lot which is located just under the castle. 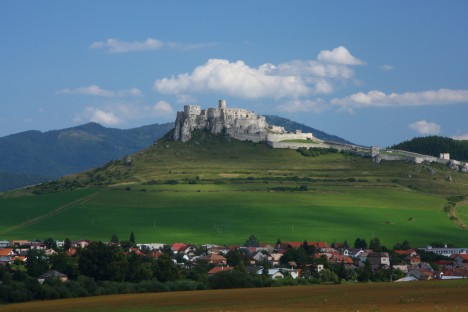 The castle is situated on an ancient trade route so this place was inhabited since Palaeolithic Period. Sometimes around the beginning of the 1st century it was a place of a very large fortress called Púchov and since then the place underwent a rich history.

When it comes to visiting Slovakia, there are a number of excellent places to visit throughout the country. However, one of the most popular destinations for many travellers who make their way to the country is that of the Spiš Castle.

It was back in 1120 when the Spiš Castle construction first began. Back in those days, it was nothing more than a boundary fort and was used to protect the region during the old Hungarian feudal days. Later on, it was set as the head of the region for several centuries. As a result of the numerous attacks on the castle throughout the centuries, many sections had been destroyed. However, as early as the 15th century, reconstruction efforts were performed in order to convert the castle into a residence. It was Štefan Zápoľský who can be credited with turning the boundary fort into the castle it is today. 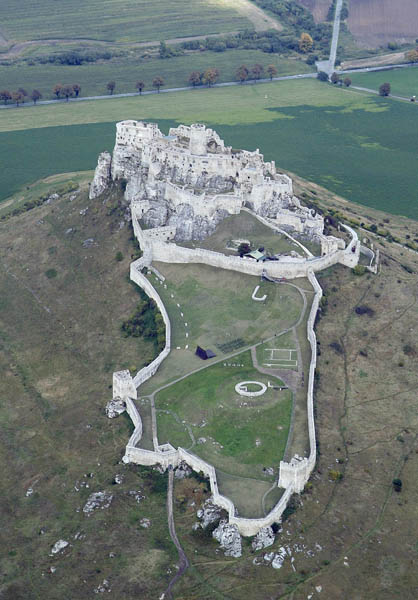 Unfortunately, back in 1780 there was a massive fire within the castle compound which just destroyed a large portion of the Spiš Castle. Since there is nobody living on the property or caring for the castle at the time, the Spiš Castle fell into disrepair. It was not until the 1970s with the help of conservationists, that extensive reconstruction and repair of the foundation, walls and other parts the castle were undertook. And while the castle today is still partially in ruins, it has long since been stabilized and many sections had been completely refurbished.

Today, the castle is openly accessible as a museum filled with multiple collections that date back through the centuries. Most of the political documentation back from the medieval days is also on display within the Castle Museum.

The Spiš Castle is a historically important castle not just in Slovakia, but also within Central Europe. It is a beautiful display of medieval architecture. It is also a picturesque, stately manor home which has been referred to by many as a palace which has inspired countless storybooks over the centuries.

So if you are heading to European Capital of Culture in 2013 – Košice, take some time for a trip and visit this castle, which is situated only 70 kilometres away.