Seegrotte in Austria – the largest underground lake in Europe

Not far from Vienna, in the village of Hinterbrül, there is the cave system with the largest underground lake in Europe – Seegrotte, covering an area of 6,200 m². It is not a classic natural cave but the former gypsum mine. In 1912, the ceiling fell down and mine was flooded with 20 million liters of water. 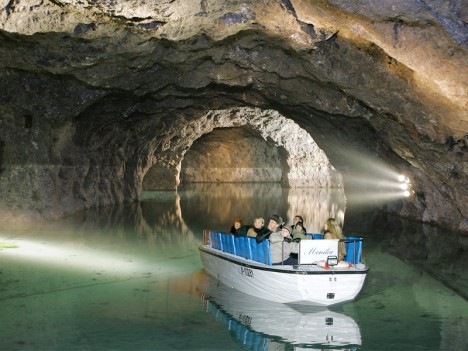 In the past, up to 1800, the cave was used for making red and white plaster. During World War II the cave housed also the factory for the production of combat aircraft. The first jet fighter in the world (Heinkel He162) was constructed right here.

The underground lake was explored in the 30′s of last century, and later open to the public. There are 9 °C in the cave and the tour lasting 45 minutes includes a boat trip. Seegrotte is now great tourist attraction with about 250,000 visitors a year. It is open every day, all year-round. The basic adult admission is €9 or €6 for children.

Seegrotte is one of the most impressive natural attractions in the world. Being also a cultural monument it should be definitely included in your list of places to visit when travelling to Austria.

View The Hinterbrühl Seegrotte in Austria in a larger map