Orava castle – one of the most attractive tourist attractions in Slovakia

It was back in the 13th century when the Orava Castle was first constructed overlooking the village of Oravský Podzámok along the Orava River. It is a beautiful and picturesque castle which has attracted thousands of visitors every single year. Many people insist that it is considered to be one of the most attractive tourist destinations in all of Slovakia. 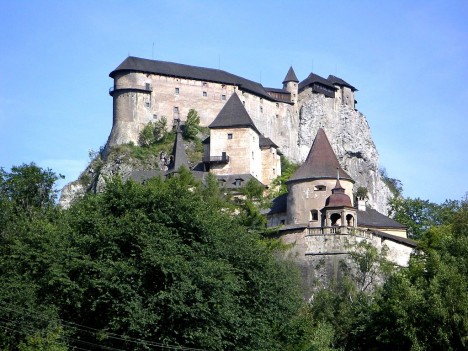 The Castle itself was constructed at the site were an old wooden fort had once stood during the Mongol invasion. The old Fort unfortunately did not survive the invasion, and soon after was replaced with the Orava Castle, which stands today. And while the Castle has undergone a number of reconstructions throughout the centuries, the most extensive reconstruction occurred back in 1611.

Unfortunately, as the centuries went on the Castle eventually fell into disrepair until the early 1800s when it was burnt to the ground completely. However, thanks to the extensive efforts of the government as well as locals, another major reconstruction effort began shortly after the end of World War II.

Perhaps one of the most interesting aspects about the Orava Castle is that of the entrance to the Castle. There are three levels of the Castle, which includes lower, central as well as upper parts. As a result, anyone who enters the Castle will have to walk through a tunnel under which the Castle’s dungeon can clearly be seen beneath. The highest part is on a steep rocky limestone cliff 112 m above the Orava river. Middle part consists of medieval buildings – Corvinus Palace and the Palace of Ján from Dubová village. The lower castle is particularly Thurzo Palace and the castle church where some members of Thurzo family are buried, the older tower and terrace. On this terrace there was a summer theatre for several years.

Today the Castle itself serves as a Museum to not just the Castle, but also to the archaeology of the region, the history of the settlements along the Orava River as well as the nation. There are countless exhibits that can be found throughout the Castle including a regular theatre and street performers. One of the most interesting aspects about visiting the Orava Castle is that it is open in the night-time to allow visitors to have a truly enchanted experience.

The basic admission is €5 – €6 and often include also the fencing duel or several music concerts from the previous periods. If you are planning your trip to Slovakia, do not forget to visit Orava castle, you will be surprised how nice it is.