Protected Landscape Area of ​​Cinque Terre is made ​​up of a wild and rocky coast. Its name got from the five villages, which are built on the edge of cliffs. They are Monterosso al Mare, Vernazza, Corniglia, Manarola and Riomaggiore. Until recently they have been isolated from the rest of world. 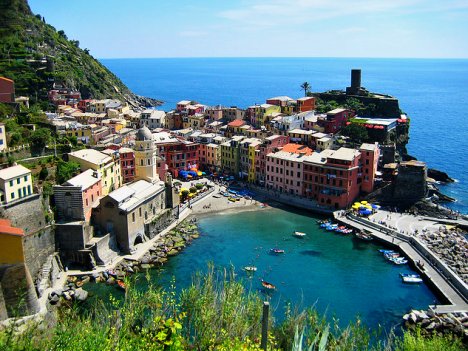 Photo licensed under the Creative Commons, created by Richard Kelland

Cinque Terre National Park can be found on the southwest corner of the Ligurian coast, at the Riviera di Levante, between the town of La Spezia and the town of Levanto. This unique coastal landscape with villages is included in UNESCO World Heritage Site.

The creation of this stunning mountainous landscape dates back to the Tertiary Period, which is more than 25 million years. Rocks are made ​​up of colorful sandstone, in which the action of wind and rain created deep valleys, steep cliffs, coves and peninsulas. Since the local slopes are too steep, there could never be built any of the larger houses or suburbs.

Homes are built together and rise up the steep slopes, or are even built on their peaks. On the local hills, the farmers even managed to build the distinctive terraced fields, some of which are wider than 1 meter. Also, the soil for farming was imported here from afar. Then there were planted olive trees and vines. At an altitude of around 100-150 m, the terraces are already so narrow that the cultivation is very difficult and unpleasant. The paradox is that right in these areas grew the best wines, such as the rare and highly prized wine Sciacchetrà. Wine production in this area has a long tradition, since the Middle Ages. During the Middle Ages the wine was frequently shipped to Rome and to the French and English royal courts.

View Corniglia on the Larger Map

Those five villages in Cinque Terre have always been accessible only by the sea or walking through winding and steep routes. At the end of 19 century the railway was built here and many local poor peasants went to La Spezia.

If you go from Monterosso al Mare to Riomaggiore, during the journey you can enjoy beautiful views of the terraces, villages and crystal clear waters bounded by rock walls.

At the southeastern part of Cinque Terre – not far from the coast, you can find three small islands: Palmaria, Tino and Tinetto. The most popular destination for tourists is the island of Palmaria. On the island of Tino there is a supporting military base, which is open to the public. But the tourists can visit it only in the 13th October on the feast of San Veneria. The smallest of the islands, Tinetto, has only a few hundred square meters, however there was a big church with a monastery, whose ruins can still be found here.

Also, the sea surrounding the Cinque Terre is a protected area. The rock walls, reefs and shoals have created ideal conditions for a number of colorful sea organisms. We can find here especially colorful gorgonians, occasionally rare white gorgonians Funicella verrucosa. Shallow waters are home to even the very rare black coral. On the islands and in the area of ​​the Cinque Terre, there is a Mediterranean climate with summer temperatures around 30°C. During winter months the temperature rarely drops below 10°C. The area offers a large amount of accommodation, since it is quite frequently visited tourist destination.