Cefalu is a historic medieval town situated approx. 60 km from the Sicilian capital city of Palermo. It is located on the northern coast of Sicily. There are not any modern hotels or new buildings, so Cefalu still retains its scenic beauty and medieval atmosphere. Above the town you can see an interesting rock called La Rocca resembling a fortress, which was once a place of the temple of Diana. The coast is lined with some beautiful sandy beaches and even in the centre of the town you can find one of the most interesting beaches in Sicily. 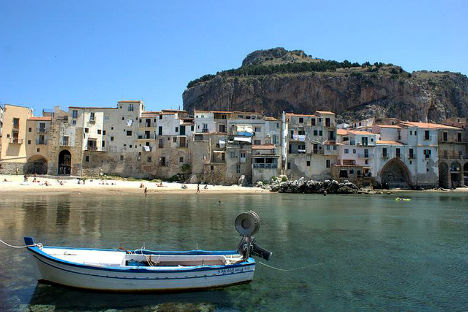 Photo licensed under the Creative Commons, created by einsfuenfsechsvier

In the center of this compact city is situated the main square, Piazza del Duomo with several restaurants and cafes which are great for relaxing in the shade of palm trees. The dominant of the city is the Norman-Arab-Byzantine cathedral of 1131, which was originally a royal tomb and the main temple of the kingdom of Sicily. The cathedral is considered one of the greatest churches of southern Europe. The cathedral was built at the instigation of the Norman kings of Sicily – Ruggero II. He survived the sinking of his ship in these places, and therefore the church built as a thanksgiving to the Virgin Mary for his rescue. The facade of the cathedral is surrounded by two towers and between them is the ancient main entrance Porta dei Re – Royal Gate. 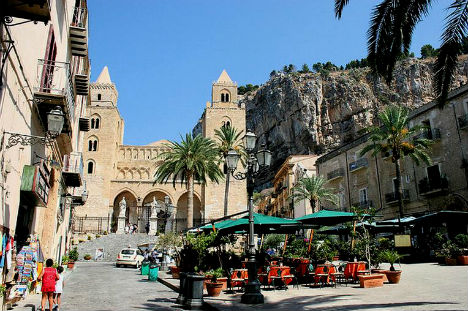 Photo licensed under the Creative Commons, created by Simon Welsh

The cathedral has now amber-yellow facade and its interior hides one of the most beautiful images of Christ in Western art. The famous mosaic of the year 1148 is the oldest depiction of Christ on the island and is located in the apse. A beautiful wooden ceiling and columns remained almost untouched for about 800 years. The cathedral is a typical example of the Romanesque style combined with Sicily-Norman style.

Not far from the cathedral you can visit the Museo Mandralisca, where are stored collections of coins, vases, pottery, Roman and Greek artifacts. You also find famous painting “Portrait of an unknown man” from 1472 painted by a major Sicilian Renaissance painter Antonello da Messina. As it is common in Sicily, also the town of Cefalu is criss-crossed by a network of the narrow medieval streets, where you encounter a shop or souvenir shop at every step. Cefalu is a great place from where you can take interesting trips. There are many natural attractions, but also other historically valuable cities.

Do not forget to visit some wine shop and try the Sicilian wines. But be careful! Most of the wines contains more than 15% of alcohol and such it can be dangerous especially in the hot summer weather!