Located in the southeastern portion of Germany, where you will find the nation’s border with Austria, you will also find the majestic Lake Königssee. For the most part, the lake is situated within the Berchtesgaden National Park; although there are parts that are not included within the park area. 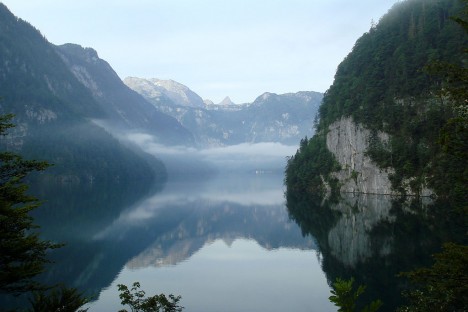 The Lake Königssee is considered to be the third deepest lake in the entire country. It is known, that the lake was formed during the last ice age by glacial erosion, and as such the lake is 7.7 km long while only being 1.7 km wide. The lake is also popularly known to mountain climbers who make their way to the area declared one of the tallest vertical ascents in northern Europe.

The lake itself, is very clear and is considered by many to be one of the cleanest lakes in all of Germany. In order to ensure that the lake stays clean and clear for future generations, transportation on Lake Königssee is limited to electric powered vessels with the proper permits. This regulation has actually been in place since the beginning of the 1900s. 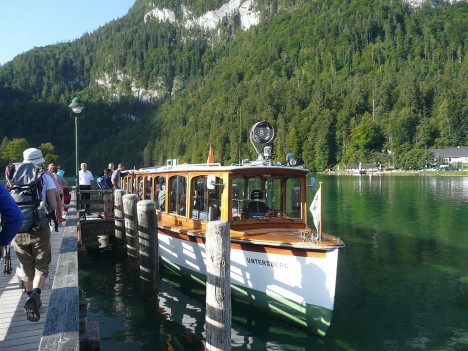 The views afforded to anyone who chooses to visit the Lake Königssee is simply awe-inspiring. As a result, not only is the region very popular for mountain climbers, but is also very popular for ecotourists. The large lake is surrounded by parkland which is considered by many to be some of the most beautiful and picturesque in the entire country. There are a number of popular hiking trails around the lake.

Due to the many sheer rock faces that surround Lake Königssee in every direction, there is an amazing echo that can be heard no matter where you are. As a result, those who choose to take a boat to travel the length of the lake, will notice that the boat stopped midway and either play a flugelhorn or a trumpet. Passengers on the boat will notice that there is a distinct echo that can be heard more than seven times bouncing back and forth from one side to the other. In the past, the echo was created by shooting a cannon; however due to safety reasons this is no longer perform. 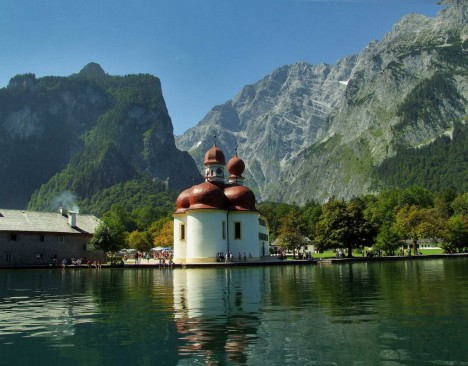 At the midpoint of Lake Königssee, there is a small peninsula that sticks out into the lake, which also has on it a smaller lake of its own. The smaller lake which is known by the name of Lake Obersee, has also become a very popular attraction in the area on account of its 470 m tall waterfall known as Röthbach. Unfortunately, there are no hiking trails that can reach the waterfall, and as such many people choose to take boat instead. Along the shores of Lake you will also find the famous St. Bartholomä church which attracts countless visitors as well.

While there are many things to see and do when you choose to visit Germany, if you want to really see the true beauty of the country then you have to make your way to Lake Königssee and the Berchtesgaden National Park region.