While there are countless caves that can be visited throughout Europe, perhaps one of the most popular destinations is that of the Lamprecht’s Cave (Lamprechtshöhle) which can be found in Austria. It is considered to be one of the most extensive cave systems in all of Europe. Furthermore it is also one of the deepest caves in the world which can be completely accessed by foot. 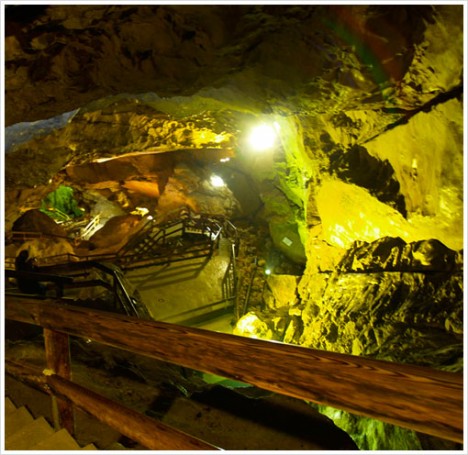 The cave itself is the center of clouded and deep mystery that dates back to the days of the Crusades. According to local legend, the cave was named after a member of the Knights Templar, Knight Lamprecht, who is said to have brought back treasure from the Crusades. Fearing that someone will try to take his treasure, he hid it in the caves.

As the days led on, the Knight grew old and weary and as a result bequeathed his entire treasure to his two daughters equally. However, one of the girls took one part of the treasure for herself and stole the other part that belonged to her sister and hid it deeper in the cave. For centuries, countless people have made their way into the Lamprecht’s Cave in an attempt to find the long-lost treasure that is said to be hidden somewhere deep inside.

Treasure hunters from all over the region would come to the Lamprecht’s Cave in hopes of finding the treasure. As a result, in 1701, the local government decided to prevent access to the cave and built a wall at the cave’s entrance. However, due to the fact that the cave is responsible for drainage of vast amounts of floodwater, the wall eventually fell down.

The cave itself is now easily accessed on foot. For the most part, even though the depth of the Lamprecht’s Cave is more than 1632 meters, the 50 kilometres of caverns that consists of the Lamprecht’s Cave network are easily accessed. However, due to floodwaters it can also be a very dangerous place. Over the years advanced alarm system has been installed within the cave in order to warn any people of potential flooding.

It was back in 1991 and 1998 when 14 tourists along with four cavers were trapped within the cave for a brief period of time as a result of heavy rains. However, although the people are trapped they are not in any real danger as once the floodwaters recede they are able to exit the cave; usually within a day or so.

Due to the fact that the cave is so accessible by foot, it has grown to become one of the most popular caves in all of Europe. One does not have to be a cave expert to traverse the meandering passageways that have been carved out over the millennia by raging floodwaters.