Situated in the southeastern portion of Spain, you will find one of the few deserts in all of Europe. The Tabernas Desert covers an area of 280 square kilometers and sees less than 200 millimeters of annual rainfall. Due to the fact that it is surrounded by mountains on all sides, it never sees the humid breeze, coming from the Mediterranean Sea.

The vast majority of the Tabernas Desert is located below 900 meters above sea level. Above this point, the temperature gets substantially more bearable and the amount of annual rain increases. And although the desert is hot and dry, it is not uncommon to see snow on the tops of the mountains surrounding it during the wintertime.

As with just about any desert, when it does rain in the Tabernas Desert, the rainfall is quite torrential. It takes a substantial amount of effort for storm clouds pass over top of the mountain peaks and enter into the valley. Those storms that have the potential can be quite dangerous. As such, much of the ground is filled with craggy sandstone and almost no vegetation. The sandstone itself is virtually incapable of retaining moisture and as such, much of the valley tends to flood and erode during heavy rains. 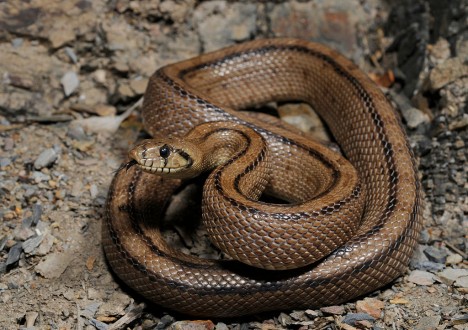 A ladder snake by Benny Trapp

But the desert itself is not absent of all flora and fauna. There is actually quite a bit of vegetation that be found throughout the region. The most common plant is the sea lavender, which is almost extinct. There are also a number of reptiles and amphibians that can be found throughout the Tabernas Desert; including ladder snakes, ocellated lizards, terrapins, spiny footed lizards as well as natterjack toads. You will also find a number different hedgehogs, rabbits as well as a number of different dormouse species. Overhead, it is not uncommon to see a Bonelli’s eagle or even a peregrine falcon soaring above.