Situated just off the northern coast if the Italian city of Sicily, nestled in the Tyrrhenian Sea is where you will find the volcanic island of Stromboli. Stromboli is home to one of the three currently active volcanoes in the country and as such has attracted many tourists over the recent years. 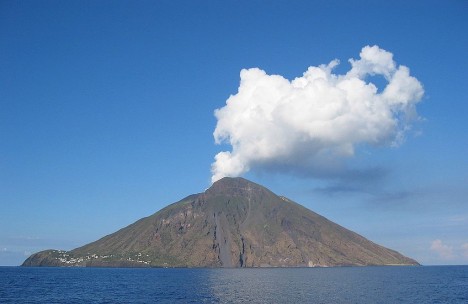 Because of its continuous activity, the island of Stromboli is home to less than a thousand people. The most recent major eruption of the volcano was back in 2009. However, because there is a constant stream of minor eruptions that occur on a regular basis, the island has become known locally as the Mediterranean Lighthouse. There are three different craters in the peak of the volcano which currently rises 926 meters above the sea.

For more than 2,000 years, Stromboli has been erupting and has maintained a fairly recognizable pattern. Since lava does not tend to flow during the eruptions, there have been very few explosive occurrences. However, there have been a number of exceptions to this.

Most people who plan on visiting Stromboli chose to take the ferry to the island in order to spend the day marveling at the volcano before returning to Sicily by nightfall.

« Neuschwanstein Castle – one of the most photographed sights in all of Germany
Filicudi – one of eight Aeolian islands near Sicily, Italy »