Located on the Island of Sicily, Mount Etna is the highest point on the island. Standing at 3,350 meters above seal level, it is considered to be the largest active volcano in all of Europe. It is hard to determine the true height of the volcano since it changes every time there is even the smallest of eruptions. 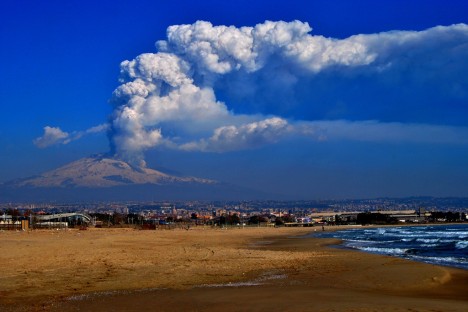 While lava tends to flow from the volcano on a fairly regular basis, very few times throughout the island’s history has the lava actually made it to the sea. There are a number of peaks located around the slopes of Mount Etna. Because of its activity, during the days of the Greeks, Mount Etna was considered to be the home of the God of Fire, Vulcan. It was also believed to be where the Cyclops lived.

Because of its height, snow falls on the peak of Mount Etna during the winter months. As a result, it is one of only two locations on the island of Sicily where one can go skiing. The other one is in the Madonie Mountains. Skiing during the wintertime is a common occurrence, especially by the local population of the island.

There are a variety of different plant species that can be found along the slopes of the volcano. The most common trees that one can see are oaks and pine trees. The most commonly found plant in the foothills of the mountain is the Broom Plant which can be found everywhere.

There are many streams and ponds that can be found along the slopes of the volcano as well; especially in the denser wooded areas. Here you will find a number of amphibians such as frogs, turtles and toads. There are also a number of salamander species that live in the waters of Mount Etna. The largest lake that you can see along the slopes of the volcano is that of Gurrida Lake.

While there are roads that lead up into the upper portion of Mount Etna, the volcano is best explored on foot where vehicles simply cannot reach. There are a number of different nature trails that lead up into Mount Etna. On the western slopes of the mountain is the Monte Gallo to Rifugio della Galvarina trail, to the north is the Casa Pirao to Monte Spagnolo trail, then there is also the Monte Nero degli Zappini Nature Trail and the Mount Zoccolaro Nature Trail.

One of the more popular hiking trails up the slope takes you from Casa Pirao, up into Monte Spagnolo. The hike will take nearly five hours round trip. That does not include the times that you will want to stop, get something to drink and take some photographs of the awe-inspiring views. Do not forget to take enough water with you as well as something to eat.

« Filicudi – one of eight Aeolian islands near Sicily, Italy
Valley of the Butterflies in Greece, Rhodes »