Diros Caves – one of the most important natural sites in Greece

The Diros Caves are a parent caves which can be found just outside of Pyrgos Dirou. These caves were extensively explored by Ioannis and Anna Petrochilos back in the 1950s as a result of the numerous discoveries inside the caverns, archaeological research of the region began back in the 1970s.

The parent caves which are known locally as Vlichada and Alepotripa are massive subterranean geological structures which were carved out by flowing water over numerous millennia. During the late Neolithic Period, the Diros Caves were used as a shelter, workshop, cemetery as well as a temple. At one point in time, it was also commonly used as a goods storage. 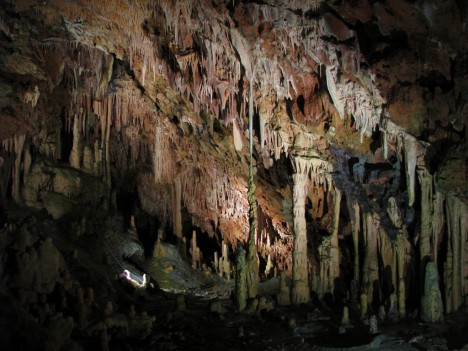 It is also interesting to note that the inhabitants of the caves were killed during an earthquake towards the hand of the Neolithic period. This earthquake resulted in the cave’s entrance being blocked.

Throughout the cave known as Alepotripa, there are countless stalagmites and stalactites. Some of these natural formations are more than 500 meters in length. The cave itself covers an area of more than 6500 square meters. At the end of the cave, there is an impressive subterranean lake. Unfortunately, this particular cave is still being explored and has not been open to the public yet.

The larger of the two caves is that of Vlichada, which covers an area of more than 16,700 square meters. There are countless water passages that make up the cave system, only 2800 of them have been explored today. The main sightseeing route of the cave itself, is two and half kilometres long and takes 40 minutes to traverse by boat. There are also sections of the cave which are only accessible by foot, so it is suggested that you take a guided tour through the cavern in order to see everything that this natural beauty has to offer.