Vikos Gorge in Greece – one of the deepest canyons in Greece

Vikos Gorge lies at the north-western part of Greece, in the Pindos mountains. It belongs to the deepest canyons in Europe.

Vikos Gorge is 20 km long and 400 m wide but at some places it is only a few meters wide. Its walls are high in some places over 1000 meters. Due to its size, the Vikos Gorge ranked the world’s deepest canyons and is listed in the Guinness Book of Records. 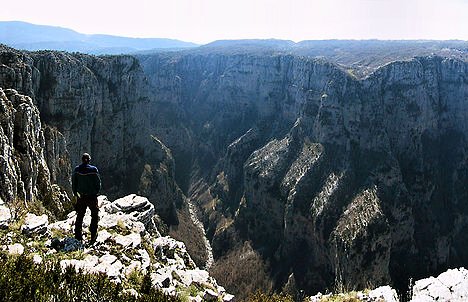 Photo licensed under the Creative Commons, created by Onno Zweers

Part of the Vikos Gorge is covered by the National Park Vikos-Aoos, which was founded in 1973. Except of canyon, there is also Tymfi mountain, river Aoos and several villages. The main part of the gorge stretches from village of Vikos to the village of Monodendri. The river Voidomatis flows through the canyon which constitutes the breathtaking scenery. Along the gap there are several view-points, offering breathtaking views. In the local unspoilt countryside there are many species of plants and animals such as bears, deer and foxes, which are protected by park. 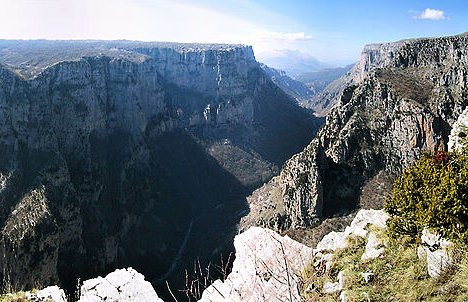 Photo licensed under the Creative Commons, created by Onno Zweers

The area around the Vikos Gorge is ideal for many sports. Among others, climbing, mountain biking and of course hiking, which is the most popular. It is better to hike with a guide as it is very easy to get lost here. There are ongoing organized excursions, including a tour through the Zagori picturesque villages and famous stone bridge.

You can get to the Vikos Gorge e.g. by public bus transportation service. The journey from Athens to Zagori takes about 7 hours.

View Vikos Gorge in Greece in a larger map