Lake Prespa in Greece (partialy in Albania and Macedonia)

Located in the southeastern portion of Europe, along the border of Albania, Greece as well as Macedonia, you will find the twin lakes known as Lake Prespa. Situated 853 meters above sea level, the Great Prespa Lake as well as its smaller sibling are a very popular summer destination for the locals as well as people from all over the world. 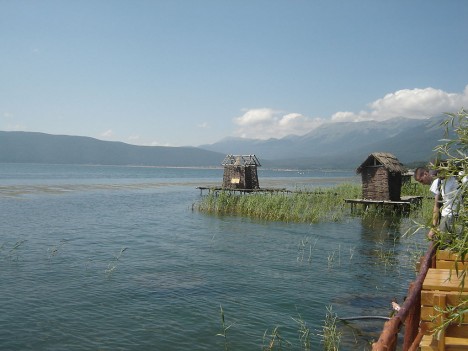 There are many things to see and do in and around Lake Prespa. Not only is there the recreational aspects of the lakes themselves, but there is also a historical aspect to the region as well. On the island of Agios Achillios which can be found in the smaller Lake is home to a 10th century fortress that was constructed by Tsar Samuil. There is also a 10th century church on the same island which is known as the Church of St. Achillius. On another nearby island, there is also a monastery which was built back in the 14th century.

For the most part, the region surrounding Lake Prespa was never heavily populated or developed on account of its strategic goal military importance up until the Greek Civil War. During the fierce battling of the war, most of the inhabitants of the area left and never returned. By the turn of the new century, it was determined that the region needed to be protected for future generations. As such, it was developed into a transnational Park; with national parks located in each one of the four nations that border the area.

There is a wide diversity of plant and animal life, which live within the region surrounding the twin Lakes. In the lakes, there are more than 11 different native fish. Nine of these native fish are endemic to the region.

Every year countless individuals make their way to the lake shores in order to get some much needed rest and relaxation in the great outdoors. There is a lot of things to see and do in and around Lake Prespa today.