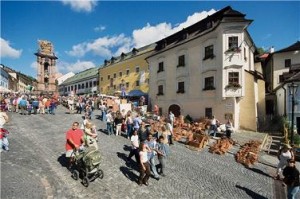 One of Slovak sights which are included in UNESCO World Heritage List is a town of Banská Štiavnica, lying in the valley of Štiavnica Hills. Its growth and wealth are linked to the mining industry, mainly in the mining of silver and gold. Evidence of this is the city’s coat of arms, fortifications and mining tools.

The history of Banská Štiavnica has deep roots. Precious metals were mined here as early as ancient times, when Celts settled the area. The first written evidence of mining dates back to 1217. In 1238 Banská Štiavnica got the privilege of royal city, and already at that time there were two basilicas. From then until the 18th century the city and surrounding areas belonged to the most productive mining areas of silver and gold in Europe. The peak was reached in 1690, when it produced a total of 29 tons of silver and 605 kg of gold. Similar results also brought the year 1740 with 23 tons of silver and 600 kg of gold. However the worst years were 1442-43, when the city was attacked by troops of Bishop Šimon Rozgoň and was also damaged by a strong earthquake.

The city centre is full of churches and public buildings, but also rich houses of miners, merchants and craftsmen. Urban protected area, the original historic core of the city, now includes 360 buildings. Major attractions include the Plaza of St. Trinity with the plague column, rich townsmen houses, town hall and the church of St. Catherine, Kammerhof, the Church of the Assumption of the Virgin Mary, Old and New Castle, Piargská gateway etc.

In addition to architecture and culture Banská Štiavnica was a place of developing science, technology and education. In 1762 there was established Mining Academy, which became the first technically-oriented school in the world. To the mining was later added also forestry. Academy Buildings have been preserved until today.

Traces of mining we can find also in the surrounding countryside. There arose an interesting system of artificial lakes and canals used for drainage down and moving various devices. About 60 water tanks are now used primarily for recreation. Although ponds were created artificially, they fit remarkably well into the landscape. The surrounding Štiavnica Hills offer many interesting and outstanding tours with rich flora and fauna.