Just outside of Stuttgart, you will find the Hohenzollern Castle – one of the most picturesque castles not only in Germany but also throughout the whole Europe. Situated on top of an 855 meter tall mountain, the castle was first built back during the 11th century, then was rebuilt in 1423. The Hohenzollern family was a very powerful family during the Middle Ages. They ruled Brandenburg as well as Prussia up until the First World War. 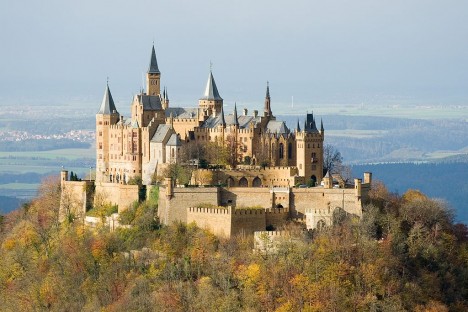 Hohenzollern Castle, Germany by A. Kniesel

Nestled on top of Mount Hohenzollern and overlooking the village of Hechingen in the Swabian Alp foothills, the Hohenzollern Castle has grown to become a very popular destination within Germany. And although the original castle was built back in the 11th century, when the imperial cities of Swabia laid siege to the castle in 1423 for more than 10 months, the castle finally fell.

The family then decided to rebuild the castle to be larger and more stable than its predecessor. Construction began on the new castle back in 1454 and took seven years to complete. It then served as the family’s refuge throughout the Thirty Years’ War. It played a very crucial role in the nation’s history due to its strategic location. However, after the 18th century it lost most of its strategic importance and eventually fell into disrepair.

As a result of this disrepair, many of the buildings have been demolished over the years. The only part of the original castle that still remains today is that of the chapel. However, in 1846 construction was underway once again to rebuild the Hohenzollern Castle. Under the rule of King Friedrich Wilhelm IV, a third version of the castle was constructed as a memorial to the family.

The last person to ever call the Hohenzollern Castle home, was Prince Wilhelm the Prussian Crown as well as his wife. Both the Prince and the Princess were buried on the grounds. Today, the castle stands as a museum to the history of Prussia. Many important historical artefacts are currently housed within the castle grounds.

The Hohenzollern Castle is a very popular destination in Germany. Each year countless individuals make their way to the castle in order to experience one of the finest examples of medieval architecture in the country. There are so many historical artefacts that are still housed within the castle including a letter from US President George Washington which had been addressed to the Crown Prince for his effort and assistance during the US Revolutionary war.

The Hohenzollern Castle is open daily (with just few exceptions) all year round and the opening times depend on the season. The basic adult admission is €10 for both castle grounds and rooms.

For further information visit the official site of Hohenzollern Castle.