Hohenschwangau Castle or Neuschwanstein in Germany 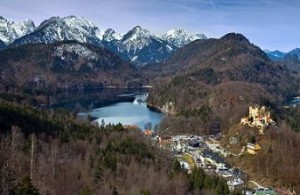 Hohenschwangau Castle (Schloss Hohenschwanstein) is a 19th century palace in southern Germany in wonderful place in mountains. It was the childhood residence of King Ludwig II of Bavaria and was built by his father, King Maximilian II of Bavaria. It is located very close to the border with Austria in the German village of Schwangau near the town of Füssen, part of the county of Ostallgäu in southwestern Bavaria. Ludwig originally named his new home New Hohenschwangau Castle, but after Ludwig’s death, it was re-named to Neuschwanstein.

More than 300,000 visitors from all over the world visit the castle each year. It is open all through the year from 9am to 6pm (April through September) and from 10am to 4pm (October through March). Guided tours are provided in German, English, French, Italian, Spanish, Russian, Czech, Slovenian and Japanese.

View Hohenschwangau Castle or Neuschwanstein in Germany in a larger map