The city of Siena is composed of 17 different neighbourhoods. Twice a year, on July 2nd and August 16th, a resident from each of the 17 neighbourhoods competes against one another in the historic Palio di Siena. The seventeen neighbourhoods represent the medieval contrade armies that were created in order to defend the city of Siena after having declared independence from the control of Florence. 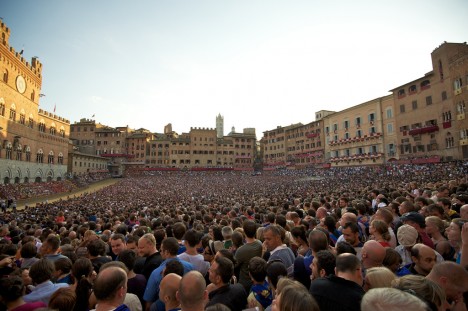 Twenty days prior to the July 2nd race, a total of 10 contestants will be draw to compete in the first event of the year. The remaining 7 contestants will participate in the second event on August 16th; along with the top three contestants from the July race. Three days before each race, the contestants are assigned the horse that they will be running in the race.

The Palio di Siena is considered to be one of the most famous and historic of festivals in the whole of Italy which takes place every year in the Piazza del Campo square; a fan shaped earthen race track. The actual festivities of the event start on June 29th and will continue on until August 13th of each year. 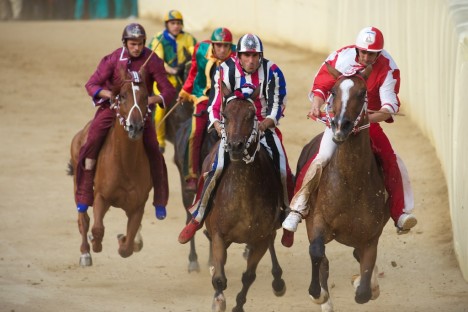 On race day, there is a special mass held in Siena where the contestants and their horses are blessed before the start of the competition. Trial runs are held until around 3 in the afternoon; after which a procession makes its way throughout the historic town center of Siena. The procession ends at the Piazza del Campo just in time for the 4:30 official start time of the Palio di Siena competition.

The race is composed of three laps around the Piazza del Campo which is roughly 1,000 meters in all. The winner wins a victory flag for their neighborhood known as the palio. It is a huge honor to win the Palio di Siena.