You will find the Cascate del Serio located in northern Italy, merely 100 kilometres from the popular destination of Milan. It is here, just outside of the village of Valbondione, that you will find the 315 meter tall waterfall known simply as Cascate del Serio. It is the largest waterfall in all of Italy, and is separated into three major sections. The top section of the cascade is 166 meters, the middle section is 74 meters and the lower section of the cascade is 75 meters tall. 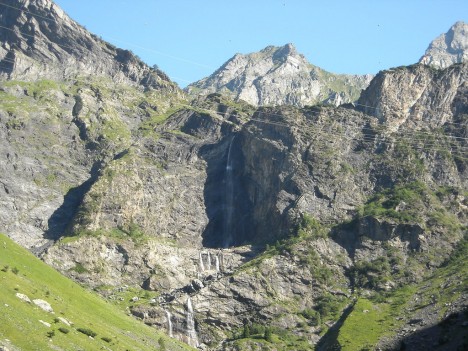 The source of the Cascate del Serio is from the Serio River which is fed by the Bergamo Alps. It was back in 1931 when the Barbellino Dam was built and created the Lago di Barbellino reservoir. This reservoir is used as a source of energy for the local hydroelectric powerplant. As a result, like many of the waterfalls in Italy, it is only open a few times throughout the year.

It is therefore important that if you plan on visiting the region in order to check out the Cascate del Serio, that you need to prepare accordingly and ensure that you are able to make it to the village on the exact day and time that the floodgates are open and the waterfalls began rushing once again. But just remember, that when the waterfall is turned on, it is only going to be visible for about 30 minutes. As a result of the rarity in which the falls are turned on, you will quickly find out upon arriving to the region that there are many other people interested in seeing this rare event.

Long before the existence of the reservoir and the hydroelectric powerplant, there was a romantic legend that was associated with the waterfalls. The legend of the Cascate del Serio speaks of a local girl who had fallen in love with a shepherd boy who had already been engaged. Not wanting to lose her shepherd, she kidnapped fiancée and locked her away forever. The girl cried out for her loss and those tears created the Cascate del Serio.

Cascate del Serio is planned to be opened in 2013 as follows: