Home » Nature » Mountains » Glen Coe – a narrow valley with towering mountains on either side | Scotland, UK

Glen Coe – a narrow valley with towering mountains on either side | Scotland, UK

In the Scotland Highlands, you will find the popular Glen Coe. Many people insist that the coe is perhaps one of the most beautiful locations in the entire country. The area is a narrow valley with towering mountains on either side.

More than four hundred twenty years ago, there was an active super volcano that existed in the area. A fierce eruption occurred back in the Silurian period which created most of the cauldron-like formation. After the end of the last ice age, a giant glacier had formed in the region and as it receded, it carved out the coe. 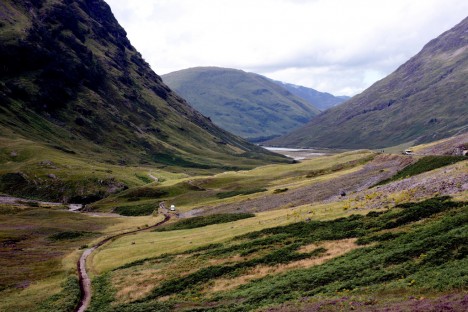 The area is less than seven hundred meters wide in many spots and more than sixteen kilometers long. The narrowest point of the coe is known as the Pass of Glen Coe and can be found roughly in the center.

In order to get top Glen Coe, you will need to enter the area at the base of the Meall a’ Bhuiridh mountain, not too far from Rannoch Moor. For nearly 12 kilometers the coe runs almost due west from the moor before making a turn to the northwesterly direction. At the other end of Glen Coe is where you will find Loch Leven and the famous village of Glencoe.

Throughout the length of Glen Coe, you will see the ancient River Coe which was formed as the glacier melted away. At the Pass of Glen Coe, one can see waterfalls as the water makes its way out to the sea.

The resulting properties of Glen Coe are simply amazing. Each year, countless visitors make their way to the area to see the many attractions that the coe has to offer. The site is very popular for those who just like to walk in beautiful surroundings and is known as an adventure for those who love the idea of climbing a rock face.

For those who come to Glen Coe for walking, the best place to start is at the Devil’s Staircase which was cut into the boulders. The staircase is more than 352 meter high and can be a challenge for most people.

Rock climbers who make their way to the area tend to go straight for the 1,018 meter tall Buachaille Etive Mòr. Over the years, climbing the face of the mountain has grown in popularity as a result of countless races and scrambles that have been held in the area over the years.

« The Great Dune of Pilat in France – the largest sand dune in Europe
European rarity – 1400 ant-hills with one billion ants in Natural Park Šebeň, Czech Republic »