In the western part of Lake Maggiore you will find a small grouping that is composed of three islands and two little islets. Known as the Borromean Islands, these islands only offer 20 hectares of area between them yet have grown to become a very popular tourist hotspot in Italy. It was back in the 16th century when the Borromeo first started purchasing the islands. The family still owns the islands of Bella, Isola Madre and San Giovanni today. 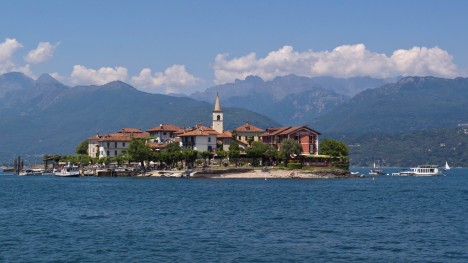 The first island acquired was that of Isola Bella which was nothing more than a rock that was named after the countess Isabella Borromeo. Over the years, a number of improvements to the island have been made including the construction of a palace during the 17th century. Vast amounts of sand were filed in around the island to increase its size over the centuries.

The second and largest of the Borromean Islands is that of the Isola Madre. The island is well-known for its many beautiful gardens. There is also a palace on the island which is adorned with many fine masterpieces from the 16th to the 19th centuries.

The Isola dei Pescatori (known also as Isola Superiore) used to be owned by the Borromo family. Today it is known as the only inhabited Borromean Island. With a small fishing village, the island has a population of a little more than 200 residents. The residents of this island are also the one responsible for bringing tourists to the Borromean Islands during the peak seasons of the year.

Both the Isolino di San Giovanni and the rock known as Malghera are uninhabited and no major structures have been built upon them. The rock of Malghera is only 200 square meters in size and is known for its small beach; it is located between the islands of Isola dei Pescatori and Isola Bella.