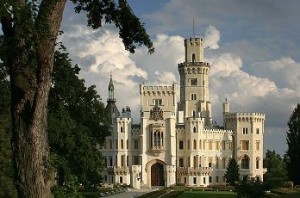 The castle Hluboká is located in the town Hluboká nad Vltavou in the South Bohemian Region of the Czech Republic, near České Budějovice. Chateau Hluboká is one of the most visited castles in the Czech republic. The town Hluboká nad Vltavou was a favourite place of Charles IV, who often visited when residing in České Budějovice. It is best known for its famous Windsor style chateau.

The original royal castle of Přemysl Otakar II from the second half of the 13th century was rebuilt at the end of the 16th century by the Lords of Hradec. It received its present appearance under Count Jan Adam of Schwarzenberg. In 1940, the castle was seized from the last owner, Adolph Schwarzenberg by the Gestapo and confiscated by the government of Czechoslovakia after the end of WWII.

Hluboká castle is opened to the public and it is recomended to visit also the inside of the castle, that is really beautiful, as well as from the outside. The extremely rich interior amenities include a valuable carvings and plaster work, a collection of tapestries, paintings, glass, porcelain, weapons, etc. Around the castle there is a large English park with baroque hunting lodge.

Hluboká castle is open daily except for Monday in June and every day from July to October. The full tour price is 130CZK / approx. €5 in 2010.

The castle has been used in a scene of Jackie Chan and Owen Wilson’s Shanghai Knights.

« Lago Maggiore – beauty on the shores of lake, Italy
Lake Como – one of the most romantic places in Italy »