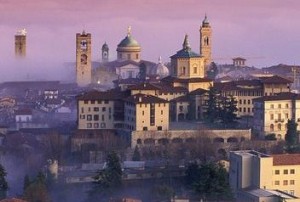 Bergamo is a town and comune in Lombardy, Italy with 120,000 inhabitants about 40 km northeast of Milan. It is served by the Orio al Serio Airport, which also serves the Province of Bergamo, and to a lesser extent the metropolitan area of Milan. The foothills of the Alps begin immediately north of the town.

The town has two centres: “Città alta” (upper city), a hilltop medieval town, surrounded by 17th century cyclopic defensive walls, and the “Città bassa” (lower city). There are funicular/cable car, roads, and foot-paths between the two parts of the town. Parking spaces are very limited in the upper city.

Città Alta, surrounded by Venetian walls built in the 17th century, forms the historic centre of Bergamo. It is an extremely expensive place to live in, with properties being sold for a minimum of 2,000,000 euro.

Città Alta has numerous places of interest including: