In the northeastern part of Italy, one can find the city of Vicenza. The city of Vicenza has a rich and colorful history and an amazing culture. There are countless museums and art galleries located throughout the city. Situated only 60 kilometers west of the canals of Venice, Vicenza is part of a bustling metropolis that is home to more than 250,000 residents. 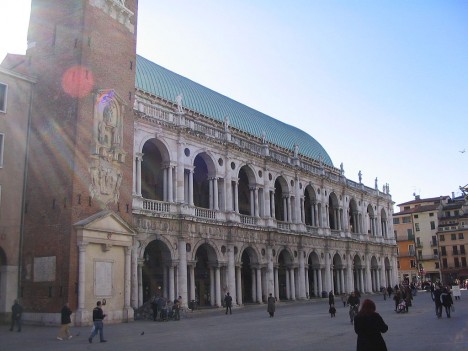 The area where Vicenza sits today was first settled back in the 3rd century B.C. by the Italic Euganei tribes. A century later, the area would also become home to the Paleo-Veneti tribes. As the Celtics made their way into Italy during the 2nd century B.C., the tribes of Vicenza would seek the help of the Romans and by 157 B.C., the city would become part of the Roman Empire.

Vicenza was first designated as a UNESCO heritage site. Two years later, the surrounding lands which are home to many Palladian Villas would be included as part of the UNESCO designation. One of the more popular villas near Vicenza is that of Veneto which is home to the ancient Teatro Olimpico which has attracted millions of visitors since its construction back in 1580.

In and around the city of Vicenza you will also find a number if buildings that have also become quite famous over the years. Near the town center you will find the Villa Almerico Capra which is known locally as the La Rotonda.

There are many plazas in Vicenza as well. The Museo Palladio can be found in the Palazzo Barbaran da Porto. The Palazzo del Capitaniato is the current home to the Town council of Vicenza. The unfinished Palazzo Porto in Piazza Castello is also a very popular destination for those who visit the city. In all, there are a total of 23 sites in Vicenza that were built by Palladio.

« Verona – the city of neverending love and paradise of open-air opera, Italy
Kraków – the second largest and one of the oldest cities in Poland »