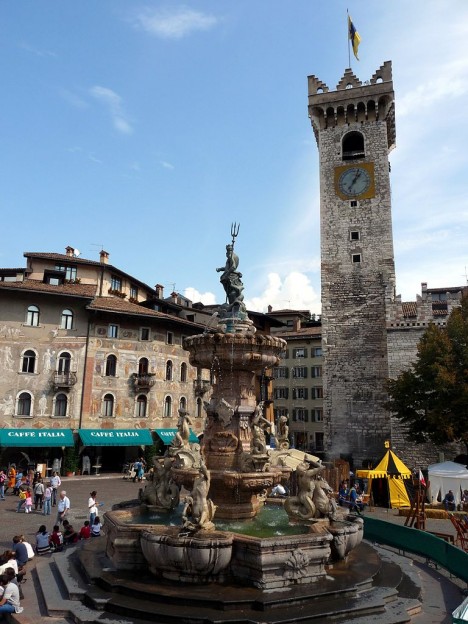 The glacial Adige River valley where the city is situated is in the foothills of the Alps. It is here that the Avisio and Fersina rivers merge with the Adige River. Fed by the glaciers of the Alps, the Adige River is considered to be the second longest in the country. Mountain tops dominate the skyline in all directions around Trento; some of which tower more than 2,100 meters above sea level.

While Trento was the historical home of the Council of Trent back in the 16th century, today it still plays an important role in Italian politics. The busting city of Trento is considered to be one of the wealthiest in the entire country.

While the tourism industry has not been an important part of the Trento economy, the city none the less offers many fine monuments and attractions that make visiting it worthwhile. The parts of the walls that once surrounded the medieval city are still standing today along with one of the towers that had once protected the city.

Today, the biggest attraction in Trento is the Castello del Buonconsiglio which is also home to the city’s main museum. Just outside of the castle you will find the Piazza Fiera. There are also several other plazas in the city. Many people make their way to the Duomo Cathedral which dates back to the 12th century and features an underground crypt which is currently open to the public. There are several other churches in Trento which were built back in the 12th and 13th centuries.