Home » Sights » Cities » Pisa – the city of the mariners and leaning towers, Italy

Pisa – the city of the mariners and leaning towers, Italy

Along the banks of where the Arno and Serchio Rivers combine and meet with the Tyrrhenian Sea is where you will find the ancient Italian town of Pisa. The city itself was made famous for the Leaning Tower of Pisa and every year tens of thousands of visitors make their way to the city to see its main attraction. But Pisa has a lot more to offer other than just the famous tower. In fact, there are more than 20 other historic buildings, palaces and bridges located throughout the city that date back hundreds of years. 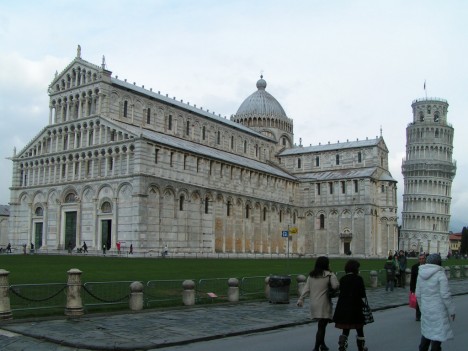 There are many famous universities and other institutes of higher learning located in Pisa. The 12th century University of Pisa is the most famous of the institutes in the city. However, you can also find the Sant’Anna School of Advanced Studies and the Napoleonic Scuola Normale Superiore di Pisa in the Italian city of Pisa.

The city dates back to the days of the Greek Empire. There have been a number of artefacts uncovered over the years which have confirmed this. The most important of these is the discovery of an Etruscan necropolis back in 1991. This means that Pisa can be easily dated back to the 5th century B.C.

Pisa was known as an important port city for the Roman Empire. Known back in 89 B.C. as Portus Pisanus, the city played an important role in the Roman naval battles against the Carthaginians, Gauls and Ligurians. Pisa would continue to be a prosperous city and home to the Italian Naval fleets until 1284 when the Genoese fleet defeated Albertino Morosini at the Battle of Meloria.

The famous 67 meter tall leaning tower of Pisa took an amazing 344 years to build. The construction of the tower began in 1173 and by the time that the second floor was added in 1178, the tower began to sink as a result of the small foundation.

« Lucca – hometown of Giacomo Puccini, Italy
Lemmenjoki National Park – the biggest national park of Finland and one of the largest in Europe »