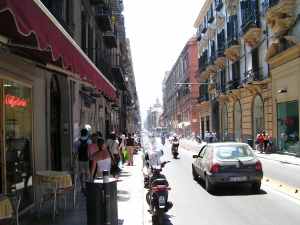 Palermo is a historical city in the northwest of the island of Sicily in Italy. It is also the cultural, economic and touristic capital of Sicily. The city is noted for its rich history, culture, architecture and gastronomy, playing an important role throughout much of its existence; it is over 2,700 years old and has 855,285 residents – they speak Italian language and the Sicilian dialect (which is absolutely different than Italian language). If you want to see anything special in Europe, try to visit Palermo and you’ll find that it is absolutely different from all the rest of Europe.

View Piazza Pretoria with the Fontana Pretoria on the Larger Map

Imaginary center of Palermo is Piazza Vigliena where meet two main streets of the city – Via Maqueda and Via Vittorio Emanuele. It was designed in the 17th Century by well-known Florentine architect Giulio Lasso. The square is surrounded by four majestic buildings with a richly decorated facade. In front of each of them there is a fountain. The sculptures in various niches show four seasons, the Spanish king and saint patron of the city. Sometimes the square is called the “Solar Theater”, since when come here at any time of day, at least one of the facades is beautifully illuminated by the sun.

Just a few minutes away you will find a major landmark of the city – Cathedral of Palermo. It was built in the 12th century at the former place of basilica and mosque. Even today, observant visitors may have noticed engraved version of the Koran in one of its pillars. The building has retained its Norman Sicilian style, however the most of what we can see today dates back to the Renaissance period.

View Cathedral of Palermo on the Larger Map

Quite morbid, but for someone attractive can be a visit to the catacombs of the Capuchin Monastery – Catacomb dei Cappuccini. There are located approx. 8000 mummies of the former residents of Palermo. You definitely should not miss a tour to a nearby hill of Monte Pellegrino, from which you can enjoy spectacular views of the city.

The airport is located thirty kilometers west of Palermo and you can get a bus to the centre of Palermo, which I personally think that it is the most craziest city in Europe and that I have ever seen.

What to see in Palermo