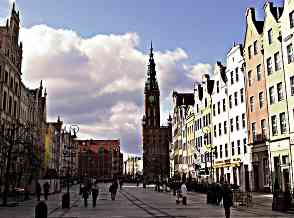 Gdańsk is the capital of Poland’s “Pomorze” province and Poland’s principal seaport. It is located on the southern edge of Gdańsk Bay on the Baltic Sea. The main industry in the city is around shipbuilding and shipping and the city is also an important industrial centre of Poland.

The city was the birthplace of the Solidarity movement which, under the leadership of political activist Lech Wałęsa, played a major role in bringing an end to Communist rule across Central Europe.

What to see in Gdańsk
Most tourist attractions are located along or near Ulica Długa (Long Street) and Długi Targ (Long Market) and the part is sometimes referred to as the Royal Road as the former path of processions for visiting kings. There one can see:

Gdańsk has a number of historical churches: