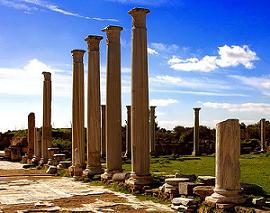 Salamis was the capital of Cyprus in the 11th century BC. It is situated on the east coast of Northern Cyprus, at the mouth of the river Pedieos, 6 km north of modern Famagusta.

There is still a large area awaiting excavation and this is forested with mimosa, pine and eucalyptus trees.

The archeological site is the most spectacular in the island because the ruins are very extensive and are in a wonderful state of preservation. For more than a 1000 years, the Ancient Salamis lay buried in sands which saved the site from wanton destruction in the Middle Ages. It must be remembered that all the ancient ruins in Europe were -free for all- quarries for the builders of the medieval castles. It was not until the late 19th century that various governments formed departments of antiquities which began keeping a watchful eye on ruins. In a similar way, Pompeii lay buried in volcanic ash, and was also saved from vandalism. As Pompeii is to Italy, so is Salamis to Cyprus.