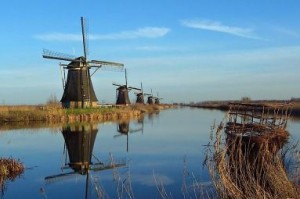 Kinderdijk is a small village lying on the Lek and Noord rivers near Rotterdam and Dordrecht in the Netherlands. It’s a very popular destination for its large network of windmills. The 19 windmills (windmolen) at Kinderdijk are on the UNESCO World Cultural Heritage list since 1997.

The windmills at Kinderdijk date from the 18th century (system was built around 1740) and it is the largest concentration of old windmills in the Netherlands. These windmills were watermills – wind-powered mills used to pump water from low-lying land back into the Lek River. Steam-powered pumps took over in the late nineteenth century (and eventually electricity) but the windmills were still operational in emergencies up to the mid-twentieth century. It is planned to have all windmills at Kinderdijk again in operational order by 2010.

There is free entry to Kinderdijk and to the windmill area and is accessible at any time. The best time to visit is on Saturdays in July and August when all mills are working if sufficient wind is blowing.