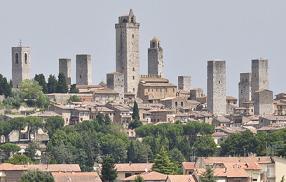 San Gimignano – the city of the beautiful towers – is a small walled medieval hill town located in north-central Italy in the province of Siena, Tuscany. The town lies 56 km south of Florence and 38 km north-west of Siena. It was founded as a small village in the 4th century BC, as the first Etruscan settlement named Velathri. San Gimignano is famous for its medieval architecture, especially its towers, which may be seen from several kilometres outside the town, and is also known for the white wine, Vernaccia di San Gimignano.

In 1990 the historic center of San Gimignano has been included in UNESCO World Heritage Sites. It is a good one-day travel tip for those visiting Pisa, Firenze and Siena.

San Gimignano is significant for its numerous medieval monuments. Most dominant are the already mentioned high ancestral towers. Unfortunately, only 15 of originally 75 towers survived until now, but they are still unique decoration of the city. You can find them in the old parts of the city – San Matteo and San Giovanni. At the time of their creation (in the year 1150) served to defend the city, but were also a symbol of prestige of the ruling families.

San Gimignano is situated at an altitude of 320 meters above sea level, so it also offers a great view of the surrounding hills and the Val d’Elsa valley. For those who wish to spend holidays in a quiet place surrounded by nature, far from the bustle of cities, San Gimignano is an ideal choice. Despite its considerable popularity and attractiveness, San Gimignano managed to retain its medieval character and unique atmosphere. Most tourists come here just for one day, and especially in the main tourist season, however off season the city is really quiet.

The city was built on the Via Francigena trail that led from Rome to the north, used mainly by traders and pilgrims. Later the settlement was renamed to Silvia. In the 11th century it was still just a small village with four houses, but in next hundred years grown to a smaller city. In 1348 the town was so weakened by constant fighting between the aristocrats and also by the plague, that they were forced to ask for a help of Florence.

By the time San Gimignano began to be attractive for Italian noble families who built magnificent palaces here. The city then experienced the largest glory, which was stopped in the 15th century. Since the beginning of the 20th century tourists from all over Europe began to explore San Gimignano and over time it became a popular tourist destination.

The most important sights include (in the addition to the stone towers) such as the city gate Porta San Giovanni of 13th century. Next to gate, among other medieval buildings, you can see the church of San Francesco. At the end of Via San Giovanni there is a medieval arch that connects two main squares, Piazza della Cisterna, lined with towers, medieval buildings and a range of tempting cafes, and Piazza del Duomo with two other landmarks: Collegiata and Museo Civic.

Another important monument is the Romanesque-Gothic church of Sant’Agostino from the 13th century or the ruins of Rocca castle with its public gardens. You can also visit a modest museum of religious art and archaeological finds – Museo d’Arte Sacra.

San Gimignano is worth visiting not only for its monuments, but also because of the amazing art gallery and great views of the Tuscan countryside.