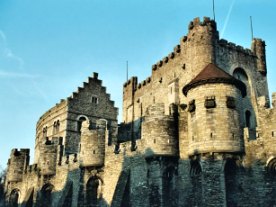 Gravensteen Castle is located in the city of Ghent, at the north-west side of Belgium. The present castle was built in the 12th century by count Philip of Alsace but at the same place was wooden castle already in the 9th century. Since 14th century, when Counts of Flanders abandoned the Gravensteen castle, served as a court and jail until it fell into disrepair. People had started to dismantle it slowly and the material used to build their houses.

Just in 1885, the ruins of the castle has been bought by the city of Ghent and started a renovation project. Despite the criticism of people that Gravensteen Castle is not worth repairing, the reconstruction was finally completed. The newly built houses were removed and the walls and dungeon were restored to their original condition.

Currently, this monument attracts more and more tourists each year.

View Gravensteen Castle in Belgium in a larger map