Siena – medieval traditions in the heart of Tuscany | Italy 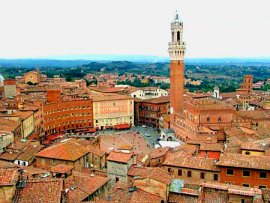 Siena is the best preserved medieval city in Italy, surrounded with the ancient walls. It is located in the heart of Tuscany and has 55k inhabitants. It is said that the people of Siena speak the most clean Italian in Italy, and Italian language students often go there to learn the correct pronunciation. The magical and beautiful Siena, culturally rich Tuscan town, is world famous for its medieval and Renaissance architecture, a stunning view of the landscape and famously fantastic cuisine, wine and Palio di Siena – horse race festival.

The historic centre of Siena has been declared by UNESCO a World Heritage Site. It is one of the nation’s most visited tourist destination, especially during Palio di Siena. The best known place is Piazza del Campo.

Siena, together with the cities of Pisa and Florence, creates triangle of the most visited cities in Tuscany. There are lots of travel agencies that organise trips for tourists to those three cities. The best option how to get there is probably via plane to airport Galileo Galilei in Pisa.

What to see in Siena