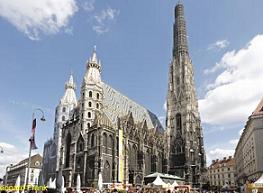 For the ideal tour of Vienna with all its sights and attractions, you will need at least three days. Hotels in Vienna are quite expensive, but you can find cheaper accommodation on the outskirts of town.

Schönbrunn Palace is a beautiful Baroque palace, which served as a summer residence of Maria Theresa and Franz Josef I and was also a favorite place of Empress Sisi. It is the most visited sight in Vienna and one of the most important cultural monuments in Austria.

The castle is located near the underground line U4 (green) “Schonbrunn”. The whole area is large, you can often walk free of charge, but at the entrance to the inside there is an admission fee (basic adult €9.50). The castle has a total of 1,441 rooms, of which only 40 rooms are opened to visitors. You can also visit the zoo, palm glass house or castle park.

There is a Schöner Brunnen fountain, and according to legend, whoever drinks from it will become pretty.

Originally, the castle was located just outside Vienna, but with time, the city has grown and it is now a part of the city center. When visiting Vienna, do not miss the castle – it is considered as one of the symbols of the city.

The Hofburg was the residence of emperors and it is now the seat of the Austrian president. The oldest part was built in 1279. The Hofburg is located in the heart of Vienna on the Ringstrasse near the underground station “Museumsquartier”.

In the area there is Sisi Museum, Jewel Box, Black Chamber, the Spanish Riding School, the Austrian National Library, the Museum of Ephesus and two large gardens.

St. Stephen’s Cathedral is a gothic cathedral located on the Stephen’s square (Stephenplatz) in Vienna’s historic center near the underground station Stephenplatz. Cathedral is from the 12th century. The temple is open to the public daily and admission is free.

Rathaus is located on the Ringstrasse next to the metro line U2 Rathaus. The building was completed in 1883. It is possible to take a tour of the townhall.

The parliament building is located near the town hall and near the Hofburg. It was built in the late 19th century, inspired by ancient Greece. In front there is a statue of the goddess Athena. Parliament is open to the public.

Belvedere Palace is the second largest palace complex in Vienna after the already mentioned Schönbrunn. The palace is situated near the metro station U4 (green) “Stadtpark” and “Karlsplatz”. The palace was built between 1714 – 1723 as a summer residence for Eugene of Savoy.

In the lower part of the castle there is the Austrian Museum of Baroque Art. There is a castle garden inspired by gardens of Versailles and the Alpine Garden. Belvedere is open to the public every day and admission fee to all parts for the adult is €14 and €9.50 to separated part.

Karlskirche or Church of St. Charles Borromeo is one of the most important Baroque buildings. The church dates from the 18th century and is located near the underground station “Karlsplatz”.

The church is dominated by copper dome which is 72 meters high. The building combines several architectural styles, such as the entrance area with antique portico, the Roman elements and Baroque features as well. The church is open every day and admission for adults is €6, the price also includes entry into the dome. During the Mass the admission is free.

The Wiener Prater is a famous amusement park (there is a free entry but you have to pay for the attraction separately), which is based in the same-name park, established by Joseph II. already in 1766.

The Wiener Prater is open all year round, but attractions are in operation only since mid-March to late October. You can find it near the metro station “Praternstern” on the underground line U1 (red), which is only three stops from the central station “Stephenplatz”. In Prater there is a giant bicycle, which was built in 1897.

Everyone can find something interesting in the Prater, for expample classic carousels, attractions, houses of horror, shootings, game rooms as well as casinos. Entrance to the grounds is free and entry to various attractions ranges from €2 to €10.

Albertina is the most famous art gallery in Vienna, located near the Hofburg. The collection is placed here since 1795 and was founded by Duke Albert von Sachsen-Teschen. Thanks to him, visitors can admire works by Albrecht Dürer, Rubens and Manet. There are also temporary exhibitions here. The gallery is open daily and admission is €9.50.

UNO City is the center of the modern city as well as Stephansplatz is the center of historic Vienna. Nearest subway line U1 (red) is the “Kaisermühlen – Vienna International Center”. There are skyscrapers and the building of the United Nations. The whole area is constantly growing.

The Donauinsel island stretches along the whole of Vienna. You can get there from the center when you stop off at the station “Danube Island” of the subway line U1 (red). The island is over 20 km long and is artificially constructed to protect against flooding. It’s true sporting paradise and home to cycling, inline skating and 42 km of beaches. There are various events and music festivals.

View Top sights to see in Wien, Austria in a larger map