The Royal Palace of Caserta with the Park in Italy 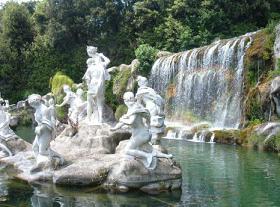 Caserta Royal Palace or the Royal Palace of Caserta (Reggia di Caserta) is the former Baroque residence of Bourbon family. It is situated in the south part of Italy, in the town of Caserta in Campania. It ranks among the largest and most extensive constructions in Europe. It was the largest palace and one of the largest buildings erected in Europe during the 18th century.

At the behest of the Spanish King Charles III. – king of Spain (1759–88) and of Naples and Sicily (1735–59), Luigi Vanvitelli began to work on the construction work in 1752. In 1759, the Charles III. became unable to manage personnel in both kingdoms upon succeeding to the Spanish throne on 10 August, therefore the castle under construction left a son, Ferdinand VI (who became Ferdinand I of the Two Sicilies, or Ferdinand IV of Naples and Ferdinand III of Sicily).

The whole building including the park were inspired by the chateau of Versailles. The palace has a ground plan dimensions of 247 x 184 m. The adjacent park has an area of 120 hectares.

The Royal Palace of Caserta has the most scenic parks in the world, scattered with fountains and waterfalls. The gardens, partly English and partly inspired by French models, are adorned with statues, made from the best Neapolitan sculptors under the guidance of Carlo Vanvitelli. Although the original draft was much more sophisticated and extensive, there were some economical reductions.

The central avenue of the park, from the gate to the big waterfall, is 3 km long. The park covers 120 hectares in total.

There are several fountains with the vasca (basin) in the garden: