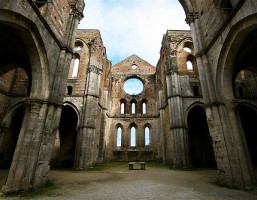 Abbey of San Galgano is located about 30 km west of Siena, near the border with the province of Grosseto, in a wild, unspoiled and rich natural beauty. Galgano Guidotti (1148-1181), son of Guido and Dionysus, was a brave, but dissolute young king, who later renounced the material world and turned to God. When he tried to break the sword on the rock as a symbol of opposition to the war, the rock suddenly engulfed it. King saw this as a divine sign. He built a hut on a hill above the abbey (now there is the chapel) and here also eventually died as a hermit. In 1185 he was declared a Saint by Pope Lucius III. Later Pope Urban III. canonized and declared him as a model of Christian kings.

You can still see the sword in the rock.