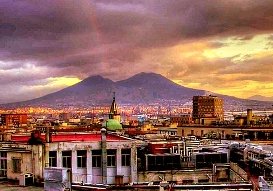 If you’re ever in or around Pompeii or Napoli, you surely will see the hill in the background. It is the volcano Mount Vesuvius (or Monte Vesuvio in Italian). It is not very high – about 1277 m but it has a lot of troubled history. It is known mainly for destroying Roman cities of Pompeii and Herculaneum when exploded in the year of 79, and killed many thousands of people. The towns’ locations were eventually forgotten until their accidental rediscovery in the 18th century.

Already on the way to Vesuvio you can see the places where nothing grows. In 1944 there was the last eruption of lava flowed through here. From the car park you can walk to the top of a very busy sidewalk. Hike is pretty tough and definitely not suitable for older people. There are stalls selling refreshments and souvenirs on the top.

During the beautiful weather it really worth to look at the Gulf of Naples, the sea and also to the crater of a volcano.