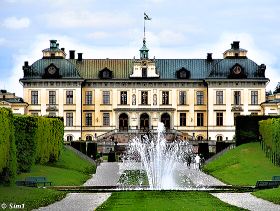 Drottningholm Palace (Drottningholms slott) is a private royal residence located on one of the outlying islands of Stockholm (Lovön), right on the shores of Lake Mälaren.

The palace was built by John III of Sweden in 1580 for his queen, Catherine Jagellon. The Queen Dowager Regent Hedwig Eleonora, widow of Charles X Gustav, bought the castle in 1661. She gave the command to rebuild a site in 1662.

Until today there are still 30 of the original props and decorations in the unique Baroque theater, built in 1766 in the Palace. The summer is still issued here with operas and theatrical performances. For safety reasons, the interior of the theater was designed with special electric lamps, instead of candles.

The entire complex is strongly inspired by Versailles and the surrounding beautiful park with symmetrical and architectural features are worth the walk. On the way to large garden complex are seen two ponds, canals, bridges, large open grassy areas, trees standing in groups or arranged in an alley, plenty of fountains, the Chinese pavilion dating from 1753 and many statues .. Most of the ancient marble sculptures were purchased by Gustav III in Italy, but here you find the Mannerist sculptures by Adrian de Vries from the Wallenstein Garden in Mala Strana, Prague, which was taken as war booty by the Swedish soldiers in the Thirty Years War.