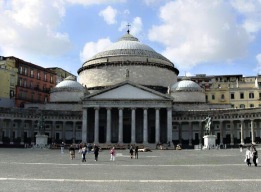 Napoli has quite a long and interesting history. The town Neapolis arose in the 8th century BC and was originally the Greek settlement, then it was settled by the Roman emperors, then by the Byzantines, Normans, Spaniards, Napoleon Bonaparte and finally in 1860 Giuseppe Garibaldi joined Napoli to the Italian Kingdom.

It is quite significant that in 1973 erupted epidemics of cholera due to bad sanitary conditions in the city, during which 30 people died.

Unique architecture and history led Napoli in 1995 on the UNESCO World Heritage Site.

What to see in Napoli
Cathedral of San Gennaro, the Jesuit church of Gesù Nuovo (on the same-name square) with an unusual facade composed of the large stones. Just Opposite stands the Gothic church of Santa Chiara.

Piazza Municipio and Piazza del Plebiscito with the Church of San Francisco di Paola with unusual colonnades. Opposite there is the Royal Palace (Palazzo Reale), home library (Biblioteca Nazionale). There is also beautiful monumental passage of the 19th century – Galleria Umberto I.

If you have more time, look at the Castel Nuovo (new castle by the sea) and Castel dell’Ovo (castle of golden eggs).

You should see also Teatro di San Carlo, that is operating since 1737, and today it is the oldest active opera in Europe and one of the largest theaters in the world.

You can go on a trip to three famous islands: Procida, Ischia and Capri. To get to Pompeii and Mount Vesuvio you can take the train or bus.

There is also beautiful Amalfi Coast (Costiera Amalfitana) at the south from Napoli, with clear blue sea and imposing rocks.