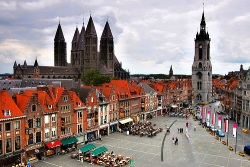 Just 7 km from the French border, 85 kilometres southwest of Brussels, on the River Scheldt is the second oldest city of Belgium, Tournai (Doornik). From Brussels, there is a very good connection by train – you can be on the train station in less than two hours, which is just a short walk from the historic center of Tournai.

The City of Tournai has a rich history, the Celts settled here already in 1st century BC. The first Christian church was built here by the Franks in 431. In the 6th century it was the seat of a bishop, later incorporated into the West-Frankish kingdom. In the 13th century the city belonged to the French kings, and just in the 16th century it became the part of the Netherlands. Only in 1830 the city became a part for Belgium.

Tournai is one of the most important cultural sites in Belgium and it is the 2nd oldest city in Belgium – after Tongeren. The city is designated by UNESCO as a World Heritage Site.

What to see in Tournai?
You can start at the heart of city – in Grand Place, which consists of Renaissance and Baroque houses with 72-meter high watch tower – Beffroi – built in the 1200. If you look from the tower across the square, you can see the Romanesque church from the late 12th century Cathédrale St. Quentin. In the middle of the square stands the memorial to Christine de Lalaing d Epinoy – heroine who defended the city during the Spanish siege. Not far from the square there are five huge towers of Cathedral of Notre Dame (Cathedral of the Virgin Mary) that you can see from all parts of the city. Cathédrale Notre Dame is one of the finest Romanesque buildings in Belgium.

Another place of interest is the 13th-century Scheldt bridge (Pont-des-Trous). You can also visit the numerous museums such as museum of tapestries, or ethnographic museum documenting life in the 17th century.